I am a firm believer that everybody sees the world uniquely. All of us have our own lens in thru we perceive and experience the world around us. For example, two people may walk through the same building and perceive two different experiences: The artist may see shapes and shadows of the architecture of the lobby. The musician might hear the subtle harmonies and melodies of the crowd of people as the move about. This diversity of perception is amazing and beautiful and I believe all should better understand it.

It has been said that anyone can draw – I mean physically draw – however, the difference with artists is how they see what it is they’re drawing. Have you ever tried to describe the lens in which you see the world?

Neuroplasticity: What makes us different from each other?

Neuroplasticity is defined as the changing of neurons and the organization of their networks through the function of experience. A persons brain is uniuqe unto themselves. It’s like a fingerprint. No ones brain anatomy is the same and no two peoples exeperiencesare exactly the same. Our brains are highly efficient meaning that they are highly responsive and adaptable to our environments and experiences. Recently I was listening to neuroscientist Michael Merzenich speak on the very topic of neuroplasticity and he said a really funny thing. He discussed how we come into this world, and that as babies we’re born stupid. Now I admit it’s kind of an abusrd thought to think babies are stupid, but he is actually onto something.

A baby cannot walk, it cannot talk, a baby cannot even hold an object in its hands. This baby isn’t stupid, it’s just a neurological blank slate. As the development of the child begins it’s brain will develop in a way that best fits the environment that it’s being reared in. This first phase of neuroplasticity is involuntary and it’s called the Adaption Phase and takes place early infancy. The neurological development of the child is dependent on the environment and the stimuli around them. People, sounds, smells, lighting, and even emotions fill this environment and the child is at the developmental mercy of the stimuli around them. As our brains adapt to our world the ground work for how we perceive is being laid.

The next phase of neuroplasticity is one that we’ll spend the rest of our lives in. This phase of neuroplasticity is completely voluntary as we are in control of actions. It’s called the Specialization Phase. It’s called such because our brains, in the process of remaining efficient, have trimmed our perception to very specialized processes. The plasticity of this phase is slow moving, unlike the adaption phase, and requires a great deal of repetition and practice.

Now, most people’s brains may be adapted to different stimuli, however the process of plasticity for people is very much the same. In certain cases though the process of plasticity can deviate from the normal course. Autism is a prime example of this. Though much about Autism remains a mystery, meaning it’s still unknown if the cause is environmental or biological factors, the most recent studies show plasticity related problems. In the adaption phase of Autism the neurons of the brain wire themselves haphazardly rewiring the brain in a new fashion different from most people. 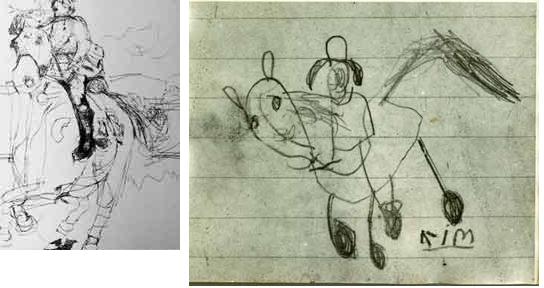 five year olds drawings. girl with autism on the left and a standard girl on the right.

If the talent of an artist is how they see this is a telling comparison of a two five year-old’s drawings. The drawing on the left is that of a autistic girl and on the right  a typical girl’s drawing. Because the wiring of the brain is different in the autistic girls she is able to see a horse differently. The girl on the right sees the entire horse. The autistic girl on the left sees all of the greatly detailed parts of the horse rather than the horse as a whole. We know this because when most people draw a human or an animal they start with the head or the face, when most autistic people draw they start with other detailed parts of body. The girl on the left started her drawing with the horse’s hooves and then the rider, and as she went along connected the pieces of the horse to complete this sketch. In fact most autistic people lack common social skills because they have difficulty reading emotion and people’s facial expressions. This is not surprising given what we’ve learned about how the image of the horse on the left was drawn.

I firmly believe that these neural differences are not deficiencies. We just have to better understand how others see the world, how they experience the world. The old ideals of science was to study universals of people, however this is becoming outdated. Rather than study how we are all alike we should study how we are different and embrace it and learn from it. I have been fortunate to work with several autistic children through sports and observation and all of them have shown me how unique and amazing our differences really are. Artist, autistic or not, we have a lot to learn from each other. With unlimited ways to see the world diverse vision and understanding is the only way to see the entire spectrum of human possibility.