It’s been a while since I’ve posted, but I promise that is going to change. I have written a lot in the past about neuromarketing and neural optimal design, but I felt it would be good to keep this post short and sweet by showing you some good marketing design that has neural influences.

I snapped this picture of these two Tabasco bottles while I was eating a burrito at my local Chipotle. Since I normally drench my steak burritos (and everything else) in Tabasco’s Chipotle Hot Sauce I have become quite attuned to this bottle and was amazed when I saw the new design.

I put them side-by-side because the new bottle’s design is great for two main reasons:

1. What jumps out at you is “BEST BITE”, but only then you realize that there is more to the message and it draws you in to read it more closely. Remember, the brain loves simple puzzles, and the main message on this bottle is perfectly arranged to draw in hot sauce users.

2. More image. Less Text. As you can see a hamburger has made an appearance on the bottle. Compared to the old bottle of hot sauce the picture breaks up the wordiness. Remember, a majority of the brain is dedicated to vision. That means your message has to contain a visual element. 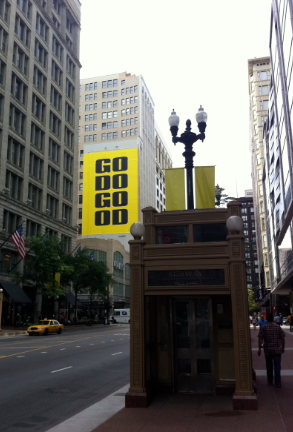 GO DO GOOD is a fun take on social marketing

While roaming the streets of Chicago, my hometown that I miss dearly, I had to smile when I came across this sign on State Street (that great street). It’s simple puzzle like design stopped me and several others in our tracks on a busy city sidewalk to consciously process the meaning.

“GO DO GOOD” is a social marketing campaign that is built around promoting good public behavior. As I continued walking down the street I saw several city public works employees sweeping train stop wearing bright yellow shirts that had the same GODOGOOD logo. Maybe it was just the buzz of being back home or maybe it was the marketing design, but it got me. I felt like doing some good and held the door open for a lot of strangers at the next place I walked in to.

I’ve said it a lot of times, marketing is evolving. The old goal of marketing was to say “hey! look at me”, and because of that we’ve become senselessly over communicated. I believe the new goal of marketing is to have people genuinely interact with your message at a conscious level. Tabasco bottle or social marketing campaign, these two messages do just that.

A long time ago I wrote an article called Burritos and your Brain. The article examined the ill received reactions from loyal customers when Chipotle decided to change their marketing design in an attempt to introduce a new logo, and how Chipotle promptly returned to their familiar marketing design shortly there after.

A little over a month ago I was driving when I spotted a billboard in the distance that looked like Chipotle’s marketing design. As I got closer I nearly crashed my car. Why, you ask. Because Chipotle had made changes to their marketing design yet again, but this time they absolutely nailed it.

This was the exact Chipotle advertisement that I saw.

Let’s examine what makes this ad so powerful by examining it through lessons and principles learned in neuromarketing:

This Ad is a Puzzle. The brain loves simple puzzles. Puzzles shake us out of our subconscious auto pilot and demand our conscious attention. With this ad you can see the bold words calling out to you, forming it’s own simple message, but it only draws you in more because you have to read the sentence that the bold words originate from. Rather than this ad just be noticed, it actually causes the consumer to consciously interact with it.

The Ad is Salient. Chipotle’s marketing design was originally created to stand out against the clutter and noise of most marketing design that fills are daily environments, and it has historically worked for them. This ad is no different. The brain loves clear contrast, and it doesn’t get any clearer than “black and white”. That’s exactly what you get when you see this ad. The black bold words pop off the white background. This ad is clean, clear and contrasting – all the things your brain likes.

Great use of Font. The “Confidential Font Type” is bold and noticeable compared most other marketing design. It’s also synonymous with Chipotle. How many other companies do you see using this font on a national level? None, exactly. The font is also uniform, meaning that the letters are all the same case. In advertising the brain actually prefers when the font is uniform.

Good Logo Use. The use and placement of the logo in the ad is very important. The use of the Chipotle logo is subtle. Studies have shown that brain prefers the subtle use of logos. Company logos that are too in-your-face have actually shown negative perception from consumers’ brains. That is definitely not the case here.

Good Logo Placement. Keep in mind that this ad was placed outside, so you want your message to be centered and high on the background so it draws vision upward. The logo placement defers to the message itself letting, it go front and center. The logo is also placed on the right side of the ad. Images should be placed on the right side of material because it’s perceived with the left side of the brain – the side of your brain that is best at processing images and pictures.

I am glad to see Chipotle continuing their marketing dominance. I cannot express how hungry I am for Chipotle after writing this article. Steak burrito, here I come! Thanks for stopping by social-brain, and thanks for reading!

A little over a month ago I was driving down I-55 heading back home after a meeting in downtown Chicago when I saw something that almost caused me to crash my car.  I saw a billboard that was red in color and featured tacos as its centerpiece. As I got closer to the billboard I realized that it was Chipotle’s new marketing campaign. I was heart broken, I was devastated, and most of all I was confused.  Why had Chipotle done away with their highly successful and recognizable marketing campaign for this red colored disaster?

this sign nearly caused me to crash my car. who are you?

I’ll start by saying that I have a profound respect for all things Chipotle. Aside from working with them on a national level for their in-store operations I had extensively researched Chipotle for my marketing classes in college. I love Chipotle from their delicious burritos all the way to their unique marketing style. I was quick to notice the change in their advertisements, but what I had also noticed is that the people around me noticed the change as well, and they weren’t too happy about it.

Chipotle does not advertise in mainstream media. They do not run nationally televised commercials and they reluctantly dabble in radio spots. They don’t have to because Chipotle does hundreds of millions dollar in business each year without foolishly wasting money on mainstream media advertising. Chipotle’s marketing is so simple it is genius. They rely on word of mouth, free burritos, and billboard advertisements that truly stand out.

These billboards stand out because they are salient from most marketing advertisements that you see today. We are visually over stimulated with colors, images, and a barrage of designs. Chipotle’s answer to advertisement overload was to produce a simplistic style of marketing for their ads, and it worked. There is barely anything to this ad. You have a witty phrase written in “Confidential” font, a picture of a burrito and the Chipotle logo. William Epsy, Creative Director for Chipotle, said it best, “In a world of advertising, who wants to read more? Simplicity is they key.”

Burritos on the Brain

Neuromarketing studies of branding have shown that the most powerful aspects of advertisements aren’t logos as previously thought, but rather they are the environmental design aspects of an ad. That is to say people respond more favorably to consistent design than a Logo. For example when I showed people just the confidential type font and asked them what it reminded them of over 85% said Chipotle. That was just the font. When I showed them a picture of the foil wrapped Burrito an even greater percentage knew it was synonymous with Chipotle.

The truth is that Chipotle’s Marketing is so strong and recognizable they could completely remove their Logo from their advertisements and people would still know its Chipotle. Marin Lindstrom, author of Buyology, calls this marketing phenomenon “Breakable” meaning that if I were to take a Chipotle billboard and break it into pieces you could look at the pieces and still recognize it as Chipotle. That’s some pretty strong marketing. The interesting thing is that Chipotle has been tinkering with their logo over time (you probably didn’t even notice), and they’ve been able to get away with it because their marketing design hasn’t changed that much, until now.

These are various logos that Chipotle has used in chronological order.

Breakable Marketing: Here is another prime example of a brand that relies on it's design more than it's logo. The Burberry logo (on left) is weak in terms of neuromarketing compared to the classic Burberry plaid design. This plaid design is versatile and can be woven into the fabric of the clothes to create a concrete perception that moves beyond logos. Break the plaid design into pieces and you've still got something that is recognizably Buberry.

Here is a side by side comparison of Chipotle’s advertisements. The one of the left holds a heavy neuromarketing presence in your brain: The recognizable font, the focus on Chipotle’s core product – the burrito, and the stand out simplicity. The advertisement on the left features tacos – something that Chipotle offers but not its specialty. The font is boring and non-recognizable because hundreds of companies use that font in their advertising and the same can be said for the deep red color and text bubble design.  Although both adds are emotionally appealing because of the witty phrase content the traditional marketing ad is just designed better to stick.

Three weeks after I had first spotted the new Chipotle advertisement on I-55 it was gone. In its place was Chipotle’s traditional marketing advertisement that we all know and love. I guess Chipotle was wise to the fact people weren’t too happy with the change. I did notice that the traditional billboard featured a new Chipotle logo, but I was okay with that because the design was the same as in the past. A nearly perfect marketing campaign was restored to its former glory. Our brains love consistency and recognition. Chipotle’s traditional marketing has both.

As marketers we are highly creative and sometimes we think we need change when we actually do not. This was a classic case of “if it ain’t broke, don’t fix it.” However, in this failed attempt at change we were able to discover that you can change and evolve a logo of a successful brand so long as you don’t overhaul the design of the marketing itself. Neuromarketing was right this time around in pointing out that our perception is keener to consistent marketing design rather than a single logo.

Good luck Chipotle and keep up the great work!